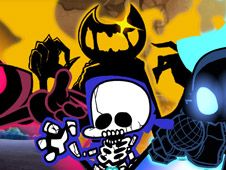 What is FNF Indie Cross – Crossed Out?

In the FNF Indie Cross – Crossed Out mod, Boyfriend takes on all three characters from the classic mod all at once, meaning Cuphead, Sans, and Bendy, in a version of this song that is harder than any others you might have played in the past, so giving it a go will challenge you but also provide with lots of fun!

BF is Crossed Out with the Indie Cross characters of FNF, help him beat them!

Watch for when arrow symbols float and match above BF's head and press the identical arrow keys at the same time, doing it until the song ends to win while being careful not to miss hitting notes too many times in a row, that will lead to you losing. Good luck and the best we wish you all!