FNF Genocide Song but All Sonics Sings it

FNF: TKO but Matt Goes All Out 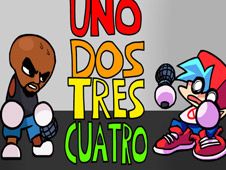 What is FNF: TKO but Matt Goes All Out?

It will not be tons of fun to be playing FNF mods with Matt from Wii Sports, one of the most popular characters to have come over into this series of rhythm games, which is the reason why right at this moment our administrative team invites you all to play FNF: TKO but Matt Goes All Out, where he becomes a boxer during the music battle, so you will battle both with fists and musical notes!

Give the TKO to Matt, in the musical battle!

As is the case with these reaction time games, watch for when the arrow symbols above BF's head match one another, and at that moment, press the same arrow keys yourself and keep doing that correctly until the end of the song in order to win.

Be careful not to miss pressing the keys too many times in a row, because if that happens, you will have lost and have to start again from scratch, something we don't wish for any of you. Good luck!