FNF vs Flippy Flipped Out! 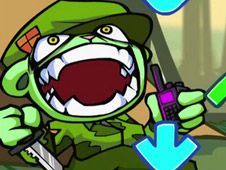 What is FNF: Flippy Flipped Out Sings Hellclown?

Flippy from Happy Tree Friends has quickly and easily become one of the most popular characters to mod in the FNF Games series, which is why he is making his return once again right now when our administrative team invites everyone to check out the game called FNF: Flippy Flipped Out Sings Hellclown, where Flippy is back to challenge BF, this time on this awesome song called Hellclown, which comes from Tricky's mod!

Defeat Flippy on Tricky's song and bring him back to normal!

You will see that above BF's head there will be arrow symbols that match one another, and your goal will be to also press the same arrow keys at the same time, something that you have to keep doing until the end of the song to win.

Be careful not to press the wrong keys or press the keys at the wrong times, because if you make that mistake too many times in a row, you will lose the game and have to start it again from the start.

Good luck to all you funkers, and we hope that you stick around for all the other amazing games of the day still coming for you!