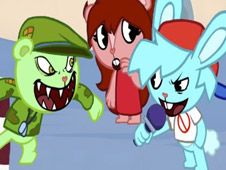 What is FNF vs Flippy (Happy Tree Funkers)?

The Happy Tree Funkers FNF mod returns right now with the VS Flippy version, where talking animal Boyfriend has to face off this crazy green rabbit through two of the original songs of that mod, as well as a brand new song for a full tracklist of three:

Whether facing him in the story mode or free play mode, to win you need to do the same thing, which is reaching the end of the song by playing all of its notes according to the charts.

So, when you see arrow symbols float and match above BF, that is when you need to press the identical arrow keys. Don't miss doing it multiple times in a row, or you have to start again from scratch. Enjoy!