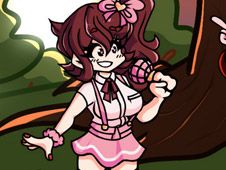 What is FNF: My Tree Feelings?

Boyfriend is now in an anime-style world where he has to defeat a new opponent called Bow-Chan, something we invite you to do right now and have lots of fun with, in the game called FNF My Tree Feelings, which features the following songs:

It's BF Vs Bow-Chan in FNF My Tree Feelings!

Make your choice between the two modes in the main menu, and in either case, give your best to reach the end of the songs by hitting your notes according to the charts to win.

This means that when you see arrow symbols match above BF's head, that is when you need to press the identical arrow keys to hit your notes.

Be careful not to miss hitting notes multiple times in a row, because that happening leads to you losing. Good luck and all the best we wish you all!