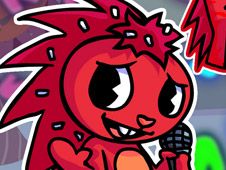 What is FNF vs Flaky Remake (Happy Tree Friends)?

The FNF Flaky mod has gotten a Remake, and since Happy Tree Friends characters are always received very well on our website, we've got no doubt at all that this new mod will be an instant hit where you will be having tons of fun from start to finish, especially with this new expanded tracklist:

Try the FNF Flaky Remake, it's even better than the original Happy Tree Friends mod!

From the game's main menu you can make a choice between the weeks of the story mode or the individual songs of the free play mode, but the way towards winning is the same in both cases. We mean you have to reach the end of the songs by playing your notes with Boyfriend according to the charts.

To do this, watch for when arrow symbols float and match above BF's head, and press the identical arrow keys at the same time. Be careful not to miss hitting those notes too many times in a row, or you lose and have to start again from scratch. Enjoy!