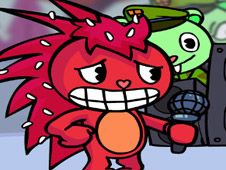 What is Friday Night Funkin’ VS Flaky?

Flaky is another character from the Happy Tree Friends to make his debut in our series of FNF Games online for browsers, and he is a red animal with a dangerous hidden alter-ego of which you need to be careful of, and he might really snap after you defeat him in a musical battle through this awesome new mod called Friday Night Funkin’ VS Flaky.

Not to be outdone by Flippy, Flaky brought along four original songs:

Start by picking between the story mode and free play mode, and then give it your best to reach the end of the songs and follow their charts appropriately to win. When the arrow symbols above Boyfriend are matched with one another, that is the time where you also have to press the very same arrow key.

Be careful not to press the wrong keys or get the timing wrong, since that will be a missed note, and if you have too many missed notes one after another, you lose the game and have to start all over again. Good luck, and we hope that this is far from the final new game you get to play here today!