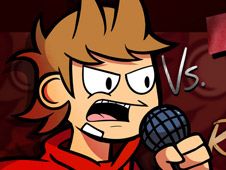 What is Friday Night Funkin VS Tord Remastered?

The FNF Tord mod has taken everyone by surprise and became way more popular than some of you were probably expecting, and if you loved playing it, we're sure you will love it even more than right now we get to share with you the game called Friday Night Funkin VS Tord Remastered, which is an HD version of the original game, where Tord, BF, GF, and all the other characters, the background, and everything else looks a hundred times better!

A quick recap on Tord from FNF:

Tord is an original character coming from the Eddsword animated internet series, a man with a red hoodie and a plaster on his face, who can also turn into a robot at times, with him having started off as a good guy and ended up a villain in the show. Norway and Tordbot are his two main custom songs you will duel him on.

How to play Friday Night Funkin VS Tord Remastered:

For the few of you here who don't know how FNF Games online work, worry not, since we're explaining it to you right now and here, no worries!

In order to win the rhythm game you have to press the arrow keys at the same moment when the arrow symbols which float around match one another, and make sure not to have too many misses in a row, or you lose the game.

Good luck, defeat Tord, and stick around to see what other games with Friday Night Funkin' of the highest quality we are always bringing forward for you!