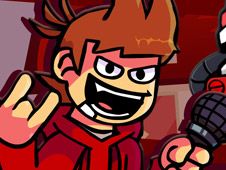 What is FNF vs Tord (Red Fury Edition) Full Release?

FNF vs Tord is best in the Red Fury Edition, and we are happy to say that we now have had the Full Release of it prepared for everyone, where you're about to have an incredible amount of fun with lots of new songs, weeks, adventures, and characters, and we will now offer you a glimpse of it through the following tracklist:

Make your choice between confronting antagonists in the story mode or free play mode, and in either case, give your best to reach the end of the songs by playing their notes according to the charts, which is how you achieve victory.

So, when you see floating arrow symbols match above BF's head on the right, or any other character that sits there, press the identical arrow keys to hit your notes.

If you miss or make mistakes too many times in a row you will lose, which happens when the health bar gets completely depleted. Good luck, we wish you the best, and hope to see you sticking around for way more awesomeness to come!