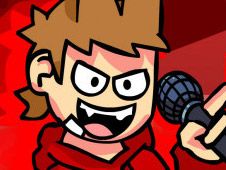 What is FNF: Tord Expanded?

Tord from Eddsworld has constantly been one of the most popular characters in the world of FNF Games, and he has made multiple appearances in it, which is why we are very excited that at this moment we could have shared with you all the game known as FNF: Tord Expanded, where you go up against him in both his human and his robot form, but with many more songs than in the original:

Show Tord who is boss on all the songs from the expanded mod!

Whether you choose the story mode or the free play mode, it does not matter, as your goal is the same, which is reaching the end of the songs by playing all their notes according to their charts.

To do this, when arrow symbols match above BF's head, you will have to press the same arrow key at the same time, because if you get the timing or the key wrong, that is a miss.

Don't make multiple misses in a row, since that leads to you losing the game and having to start it again from scratch. Good luck, enjoy!