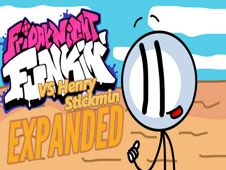 What is FNF Vs Henry Stickmin Expanded Mod?

The first FNF Henry Stickmin Mod was quite fun, wasn't it? Well, now we have expanded it and made it even better, as there are plenty more songs for you and BF to face off against this stickman on, such as:

Let's have some expanded musical fun with Henry Stickmin!

After you choose between the story mode or free play mode, play all your notes according to the charts to reach the end of the songs and win, something for which you use the arrow keys.

How? Well, you press them at the same time as the identical arrow symbols above BF match one another, but know that if you miss to do that multiple times in a row, you need to start again from scratch. Good luck, enjoy!