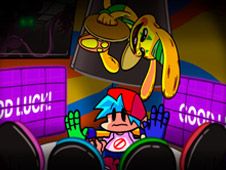 What is Poppy Funktime vs Bunzo Bunny (FNF Mod)?

Try our new Poppy Funktime FNF mod where you help BF defeat the scary Bunzo Bunny character from this video game series, where you have to defeat him on the solo track called 'Musical Memory'!

As the song progresses, watch for when arrow symbols float and match above BF, and when they do, press the identical arrow keys to hit your notes, which is what needs to be done until the end of the song to win. Don't miss pressing the keys right too many times in a row, or you lose and have to start again from scratch. Good luck, enjoy!