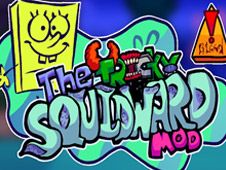 What is FNF The Squidward Tricky Mod?

We've had FNF mods with SpongeBob added on our website before, and they have all been received very well, which is why we did not miss the chance to bring you a brand new one right at this moment, especially a cool new re-imagining such as FNF The Squidward Tricky Mod, where Boyfriend is replaced by Spongebob, and you are facing off against Squidward, who has taken the place of Tricky, with the battle being done on the following songs:

You are going to be able to face off against your antagonist in either the story mode or free play mode, it's up to you, and your goal remains the same in both, which is to reach the end of the songs and play them so well that you win!

To do so, focus and have a good rhythm so that when arrow symbols above BF match with one another, you press the same arrow keys on the keyboard, not too late, not too fast, since making too many misses means losing the game. Enjoy!