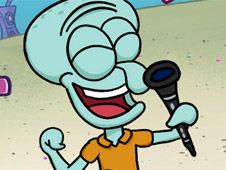 What is FNF: Squidward Night Funkin’?

Squidward from SpongeBob, without a doubt one of the most iconic animated characters in the entire world, has now become the newest antagonist that you and Boyfriend have to face off against in a rhythm game from our category of Friday Night Funkin Games, where right now we are delighted to share with you the game called FNF: Squidward Night Funkin’, where you will play on the following original songs:

Boyfriend Vs Squidward, a rhythm battle under the sea!

You can pick to play this game in either the story mode or the free play mode, it's up to you, and in both of them you have to give it your best to hit all the notes of the songs at the corresponding times in their charts, and if you keep doing this until the end of the song, you become the winner, simple as that.

To hit notes you need the arrow keys, keys that you press at the same time as arrow symbols above BF match with one another, but be careful not to press them at wrong times, because if you do that too many times in a row, you lose the game. Good luck, and all the best we want to wish you all!