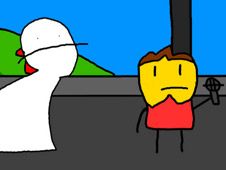 What is Funkin Night Funkin vs Sunny?

Sunny is a new badly-drawn character resembling Bob and Ron, and you now have the awesome chance of battling him in a rap battle of music in two full weeks, for a total of six awesome songs, so there is no way in hell you are going to miss out on this FNF Sunny mod, where the songs are as follows:

Defeat Sunny in a rhythm battle to have fun like never before!

Whether you choose to play the story mode, where you have to win the week by winning three songs one after another, or you choose any of the six songs from the free play mode, you still have to reach their end by playing all their notes to win.

To do this, watch for when the floating symbols above BF match with those above his head, and at the moment you need to press the same arrow keys, at the exact same time.

Be careful how you press those keys because if you miss doing it multiple times in a row, you lose and have to start again from the beginning of the song. Good luck, and enjoy!