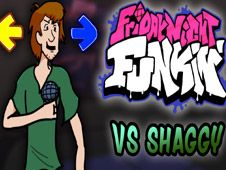 What is Friday Night Funkin vs Shaggy?

We love it when the Friday Night Funkin Games series crosses over with some of our favorite animated shows, just like it's happening today with Scooby-Doo, when Boyfriend somehow ended up in the world of mysteries and monsters of that series, and now he and Shaggy are having a rhythm battle against one another, in this awesome new mod called Friday Night Funkin vs Shaggy!

You know him already! The lovable goof of the mystery gang, who has long and unkempt hair, wears slacks and a green top and is easily scared by all the monsters that the team investigates, him being the best friend of Scooby-Doo, the world's most popular dog, and both of them love nothing more than to eat as often as possible, with Shaggy even eating the Scooby Snacks dog food off his best friend at times.

The three songs you will battle him on are called Where Are You, which is a remix of the show's original theme song, as well as Eruption, and Kaio-ken.

If you're new, learn how to play FNF Games right here:

This being a rhythm game, the most important aspect would be to hit all the notes to the song at the right times, so press the arrow keys when the arrow symbols from the screen are matching, not sooner, or later, or it is considered a miss. Take the song to the end to win, but don't have too many misses, or you are going to lose it.

Good luck to you all, and we definitely hope to see you around some more, since it would be a shame for you to not keep playing our awesome new games of the day!