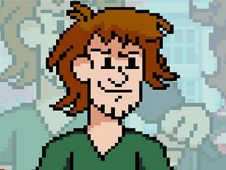 What is Friday Night Funkin vs Pixelated Shaggy?

There is no doubt at all that Shaggy has been one of the most popular characters to have come into our category of FNF Games online so far, and today is once again proof of that since he is making his return as an antagonist, this time in the Friday Night Funkin vs Pixelated Shaggy mod, where he, Boyfriend, and the whole world around them is pixelated, just like in an older video game.

This game is a re-work of FNF's Week 6 with Senpai, which is why you will play on the three songs of that week: Senpai, Roses, Thorns.

Boyfriend Vs Pixel Shaggy, a duel like no other!

When you see that arrow symbols above BF's head are matching with one another, it's your queue to press the same arrow keys on the keyboard, since that is how you play the notes of the songs. You need to keep playing them until you reach their end and the progress bar has turned in your favor to win.

Be very careful not to miss hitting too many notes in a row, because if that happens you lose and have to start again from scratch. Good luck, and enjoy your time as only here is possible!