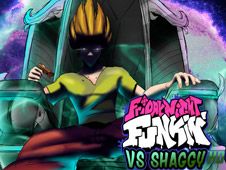 What is Friday Night Funkin vs Shaggy HD?

Shaggy is one of Boyfriend's most notorious, reputable, and definitely one of his most famous antagonists, so it was only a matter of time before his mod would get the HD treatment, with our team being very excited that right at this moment we get to share with you all the fantastic new game known as Friday Night Funkin vs Shaggy HD!

Everything looks clean, proper, and in the best possible way, with this mod featuring the following songs:

Prove you are the rhythm king by defeating HD Shaggy!

In either the story mode or free play mode, depending on your choice, give it your best to keep playing and hitting all the notes of the songs accordingly, doing it until the end of the song to win, and to do that you use the arrow keys, keys that you press when you see the arrow symbols above BF match, with you having to press the same arrows.

Good luck with that, and be careful not to press wrong or not press the keys too many times in a row, because you will lose the game. Enjoy!