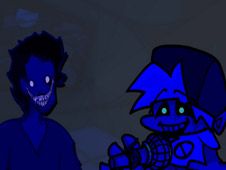 What is FNF: Shaggy Sings Endless with 6k?

Both Boyfriend and Shaggy, who are now fighting against one another in music once more, have entered their Majin form, meaning that they sort of look like possessed demons, something that is a curse from Sonic.Exe, and the only way to set them free is by taking the song known as Endless to the end, ha, ha, and win it by playing all its notes according to the charts!

Shaggy VS Boyfriend, now in 6k!

Despite the change in character designs, and the new song, your goal remains the same, which is to reach the end of the song by playing to the beat, so when arrow symbols are matching above BF, press the very same key, and keep doing it.

Make sure not to miss pressing the keys too many times in a row, because if that happens, you will lose and have to start all over again, something we really don't wish for you. We wish you win, and hope you have tons of fun!