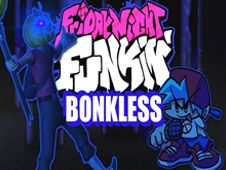 Well, look who it is! The Scout character from Team Fortress 2, one of the most popular video games in history, is now the latest musical antagonist that you and Boyfriend will have to defeat in one of our latest FNF mods online, an awesome mod called FNF: Bonkless (Endless feat. Scout TF2), where Endless is the cover song that you are going to sing together!

The Scout from TF2 and Boyfriend, a duet like none other!

You, like BF, and the Scout, will take turns singing the verses of the song, so when you see that arrow symbols above your character's head match one another, you need to press the same arrow keys yourself and keep at it until the song ends to win.

Of course, you can also lose in this reaction time game, and that happens if you don't stay on beat and miss pressing the keys too many times in a row, something we don't wish for any of you. We wish you only the best and lots of good luck!