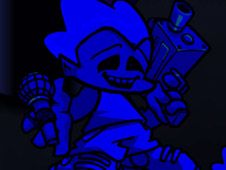 New versions of both Boyfriend and Pico are now going to appear in our latest FNF mod, where you will have a duet between Infinite/Fun Pico, and Infinite/Fun Boyfriend, and since the game has this infinity versions of these characters, it only stands to reason that the song they are going to sing together is called Endless!

Join Pico and Boyfriend for infinite amounts of fun!

Watch for when BF's turn comes to sing his part of the song, which is when the arrow symbols above BF's head match one another, so at that same moment you have to press the same arrow keys on the keyboard, and keep at it until the song ends, which is when the progress bar will tilt towards you, and you win.

Be careful not to miss pressing the keys too many times in a row, because if that happens, you are going to lose and have to start all over again from scratch. Good luck, and we hope that you stick around to play even more of these rhythm games!