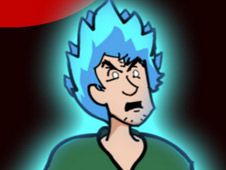 What is FNF vs Shaggy EXPURGATION Expansion?

Shaggy has evolved to the status of a god, and he is now ready to battle Boyfriend with his maximum power, as right now we invite you all to play the awesome new mod called FNF vs Shaggy EXPURGATION Expansion. This expansion brings two more difficulties in the mix and depending on the one you chose, you will also have a different ending. Do you think you can do it!

To play notes of the songs in this rhythm game, you use the arrow keys, meaning that when arrow symbols above BF match with one another, you need to press the same arrow keys, and if you keep doing that until the end of the song, you become the winner, something we wish you all good luck towards!

But, luck is not that important as is focus, because if you miss too many of the notes one after another, you are going to lose the game, and we're sure you don't want that happening, right? Enjoy!