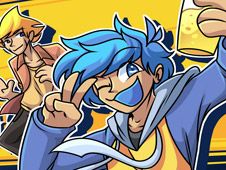 What is Friday Night Funkin’ vs Bob and Bosip (The Expansion Update)?

Bob and Bosip are two Minecraft players and YouTubers who have now entered the universe of FNF Games online, and they've already had a cool and high-quality mod featuring three songs, one that was very well received by our visitors, so when we found this expanded edition that brings along even more songs, we knew that we had to share it with you all as soon as possible, just like we are doing right now, where we invite you to enjoy the following custom songs:

Defeat the tag-team of Bob and Bosip and remain the king of music!

You will first have to go through the story mode if you are to unlock the songs in the free play mode and then play them in whatever order you want, and after the tutorial, there are two more weeks to play on, all featuring other antagonists in addition to the title ones.

When it is your turn to play notes of the songs, use the arrow keys, pressing them at the same time as the arrow symbols above BF match with one another, and do that until the song ends to win.

Be careful and focused so as not to miss pressing the keys too many times in a row, or you lose the game. Good luck, and have fun!