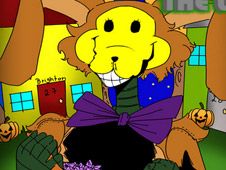 If the first FNF Walten Files game has been to your liking, you are in for a treat, as right at this moment we are delighted to share with all of you here the game known as Friday Night Funkin: Walten Files (Week 2 Update), which in addition to the first week and its three songs we've got a second one with two more songs, for the full list of five:

After choosing between the story mode and free play mode of the game, in either case, give it your best to reach the end of the songs by playing all their notes according to the charts, since that is the only way to win.

How do you play notes? Well, you watch for when arrow symbols match above BF's head and press the identical keys from the keyboard. Don't press the keys at the wrong time, or hit the wrong key, since too many mistakes in a row cause you to lose the game.

Good luck, we wish you tons of fun like never before, and we hope to see more of you around, as the fun never stops on our website!