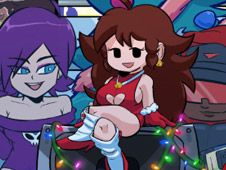 We've already had an FNF HD mod on our website, but that only went up to the fourth week, with our team now offering you an updated version called Friday Night Funkin HD (Week 5 Update), where not only do you have the week where you battle both Daddy Dearest and Mummy Must Murder at the same time during Christmas, but there is also a bonus song with Girlfriend as the antagonist, so there are many reasons why you should try this game!

Take part in your favorite musical battles, this time in HD!

You can choose to play this game in either the Story mode, or the more stripped-back Free Play mode, but in both of them, you've got the same goal, which is to sing, rap, and dance according to the beat until the end of the songs, which is when you win by turning the progress bar towards you.

To play the notes at the correct time in their chart, see when the arrow icons match above BF and then press the very same arrow key. If you get the timing wrong once, it's okay, but if you do it multiple times in a row, you lose and have to start the song again from start. Good Luck!