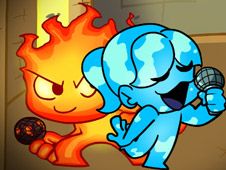 What is FNF vs Fireboy & Watergirl UPDATE?

If you already liked playing the first FNF Fireboy and Watergirl Mod from our website, which we are sure you did since they are two of the most popular characters in the whole world of online gaming, you are now invited to play the updated version of that awesome mod, which brings along three new songs, as well as two new characters to battle against, with this being the new structure of the weeks:

Challenge the two temple-dwellers in a new rhythm fight!

When you will see that arrow symbols above BF's head are matching one another, at that moment you have to press the same arrow keys on your keyboard, and you have to keep doing this until the end of the song to win, and this applies for both the Story Mode and the Free Play mode of the game, so pick which one you want!

Keep pressing the keys according to the charts all the way to the end of the songs, but be careful about missing the notes too many times in a row, because if that happens, you lose and have to start the game again from scratch. Enjoy!