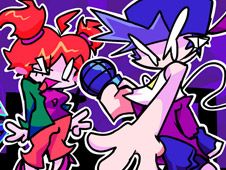 We've reached a brand new update of FNF's D-Sides mod, which brings a whole lot of new tracks, in addition to having reimagined Boyfriend, Girlfriend, and all the other characters in the series, with the rhythm game format remaining the same, since it is a classic.

In either the story mode or free play mode, to win you have to do the same thing, which is playing your notes according to the charts until the songs conclude. So, when you see arrow symbols match above BF's head, press the identical arrow keys from your keyboard. Don't miss doing it too many times in a row, or you lose and have to start again from scratch. Enjoy, have fun!