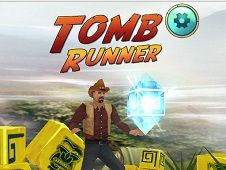 What is Tomb Runner?

Tomb Runner is a great and so cool adventure and action game, which brings you the opportunity to explore those awesome lands where the mystical tomb is hidden and exploring this kind of hanging jungle, you have to avoid the trees, bushes, different huge grass, and this kind of natural obstacles for you, which may stop you from achieving your goal. Do not forget that it is so important for you to keep it together so run!

The explorer of the tomb's world is actually a runner so let's use the arrow keys for jumping over obstacles, dodging them by getting in the necessary side, while the hanged stone route it getting divided into more pieces and also, slide down either to avoid the obstacles or for collecting the coins or gems! A single mistake and you'll be falling permanently until you crash onto something and die, so let's avoid this right now.

Good luck and try to become the greatest tom runner, establishing such a huge high score, calculated by summing up the number of meters achieved by you until your crash and the number of gems or coins collected by you at the same time!

Use the arrow keys;