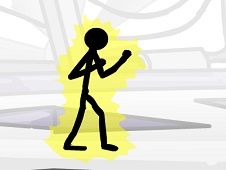 What is Electric Man?

It’s time to enter the Tournament of Voltagen to prove who is the most powerful being in the stick man universe. According to the story of Electric Man: the current champion has never been beaten. In the Tournament of Voltagen, anything from martial arts and street fighting to superpowers can be used to win. Now, players can create their character and, finally, come out victorious.

Creating Your Character in Electric man

To create your character in Electric Man, you press “New.” Once you’re on the character creation screen, you can input and change:

Once you create your character, you’ll be placed in a Voltagen training course, where you can test out the following commands:

During the tutorial, you’ll learn each of these commands until you’re ready to take on your first training opponent. After getting a hang of the controls, it’s time to start the tournament!

Each round will have multiple enemies for you to fight. Don’t worry about getting hit when each game starts, the game won’t officially start until the countdown timer finishes. Now that you have a basic grasp of Electric Man, here are some tips for you to follow:

●    One of the best tips for Electric Man is in the instructions menu: Running while executing a move will create a new attack. SlowMotion attacks and the flip over throw (Press D when running) both use up battery points.
●    Watch your battery power at the top right. You won’t always be able to use your slow-motion abilities, so make sure you time them perfectly to get the upper hand.
●    Don’t get too overwhelmed! You may be facing multiple enemies, but if you keep up the assault while smartly dodging attacks, you’ll get the hang of Electric Man in no time.