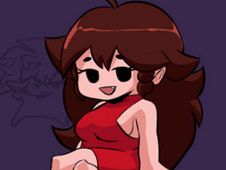 Play Friday Night Funkin HD Remix Update right now if you want one of the best new experiences this FNF Games category has for you because the game is not only in high-definition with its backgrounds, sprites, and animations, but you also have remixes of all the songs you know and love, all the way up to the seventh week:

Friday Night Funkin' in HD with Remixed songs is here, let's fall in love again with this series!

Whether you play in the story mode or free play mode, the goal you have remains the same, which is helping Boyfriend defeat the various antagonists in musical/rhythm battles, the only way that he and his Girlfriend can remain together.

To win the battles you need to reach the end of the songs, something that can only happen if you keep playing your notes until the conclusion of those songs.

To do that you press arrow keys at the same time as the identical arrow symbols match above his head. If you miss doing that multiple times in a row, you lose and have to start again from scratch. Good luck, enjoy!