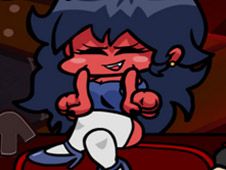 FNF Hellbeats is one of the most popular mods of the Friday Night Funkin Games series, but today we bring you a brand new version of it since we invite you all to play the game called Friday Night Funkin HELLBEATS (HMX UPDATE), where everything has been overhauled, so you have new remixes of the songs, new sprites, animation, backgrounds, and much other fun stuff!

Help angel Boyfriend protect his demon lover, Girlfriend, from all the powerful antagonists!

You are going to be able to face up to six antagonists, and you can do it in either the story mode or the free play mode, it's up to you, and you will have to do your best to play all the notes of the songs correctly, reach their end, and win like that!

To do so, when you see the arrow symbols above BF match with one another, make sure that you also play the same arrow keys on the keyboard, but be careful not to press the keys at the wrong times, or you lose the whole game. Good luck, have fun!