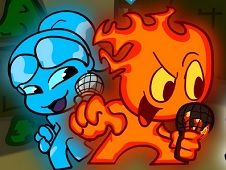 What is FNF vs Fireboy & Watergirl?

Fireboy and Watergirl are two of the most popular video games characters in the world because they are the protagonists of the 2 player games online series with the same name, where two players control those characters and work together to reach the end of each temple where they are trapped in while collecting diamonds along the way and avoiding traps.

The two characters have somehow ended up meeting Boyfriend, and now he is going to have a rap battle against them, all on three new awesome custom songs: Temple, Crystal, Friv.

FNF with Fireboy and Watergirl, get ready for fun!

You are going to be able to battle these characters in either the Story Mode or the Free Play mode, and you are going to do it by playing the notes of the songs so well that by their end the progress bar has turned in your favor.

To do so, when arrow symbols above BF match one another, press the very same keys on the keyboard to hit the notes, but be careful not to miss that too many times in a row, or you lose the whole game. Good luck!