Friday Night Funkin After The Week 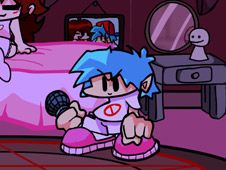 What is Friday Night Funkin After The Week?

After The Week of continous FNF fighting, BF and GF thought they could get some free time to themselves, but that was interrupted when Pico and the gang arrived, so now it's time to have even more battles, on all new songs:

Try the new FNF After The Week mod!

Whether you're choosing to play in the story mode or free play mode, to win you need to do the same thing, which is hit your notes according to the charts until the song ends. That is when you win, but if you miss hitting your notes multiple times in a row, you lose and have to start again from scratch.

To hit your notes, press arrow keys at the same time as the identical arrow symbols match above BF. Any moment later, sooner, pressing the wrong keys, or not pressing them at all means missing notes, so don't let it happen. Good luck, enjoy!