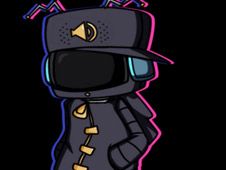 For the many fans of Friday Night Funkin Games online on our website we've brought over yet another new and fantastic game that is not worth missing out on for anything in the world, and this new mod that you HAVE to try out is called Friday Night Funkin Static Full Week, with the main reason being the awesome new antagonist that you will face, Static!

Meet Static from FNF before you defeat him in a rhythm game!

Static used to be a robot whose only purpose was to rap, but he was defective, so he is not working like that anymore, but he is a really huge fan of BF and GF, so defeating BF would be his dream, although he is satisfied just to battle him. He has a TV for a head, with yellow antennas on top of it and a hat with a speaker sign on it.

He is dressed in all-black, with boots, pants, and a hoodie, but there is a streak of gold going through the clothes, and, to show off, even more, his microphone is made out of gold!

How to defeat Static in the rhythm battle:

Just like in previous games, be focused and have good rhythm, as you need to press the arrow keys at the exact same moment that their on-screen symbols match with one another, and if you don't miss doing that too many times in a row, but your opponent misses, you will win!