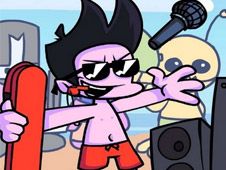 What is Friday Night Funkin’ Vs Beach Brother Full Week?

It is high time for more new FNF Games online to be added on our website for free, which is the reason why right at this moment our team is delighted to share with you the game called Friday Night Funkin’ Vs Beach Brother Full Week, which features a new member in GF's family that you have to defeat, her hypothetical brother called Beach Brother.

The main reason you've not seen Beach Brother around for the previous games in the series is that he does not really spend time with the family at home, as he is mostly on the beach, surfing, and enjoying life. Still, when he heard that Boyfriend wants to date his sister, he challenged him to a musical battle, to prevent that from happening.

He resembles his parents more than his sister does, having purple skin, and spikes in the shape of horns on his head. He wears red swimming shorts, a rescue board also in red, a pair of big shoes, cool glasses, and a whistle in his mouth, because he works as a lifeguard at the beach.

How to defeat Beach Brother:

Despite the game taking place in the summer and on the beach, the format remains the same, which is a music battle between BF and Beach Brother, where the main songs you will duel will be Surf's Up, Tides, and Beach Brawl. You can do it either in the story mode or the free play made and for each of them you choose the level of difficulty you think is most suited for you.

Tap the arrow keys at the moment that the same symbols are matching in order to hit all the notes properly, and if you do this and turn the progress bar fully green, you win, but making mistakes and causing the bar to turn red will cost you the game, so don't let that happen at any cost! Good luck!