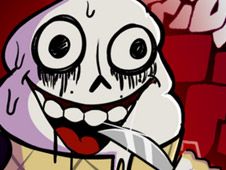 What is Friday Night Funkin vs Melty Full Week?

Of course, we still had more new FNF mods online of the highest quality in store for you, and this is always going to be true on our website since we know for a fact how much you love these games, and today's one is called Friday Night Funkin vs Melty Full Week, where you meet this brand new horror modded character you have to face!

Melty is a ice cream in a cone of the vanilla flavor, who looks really creepy, from his eyes to his mouth, and this is because he is evil from his core, and he holds a knife in his hand, as he is always ready to kill! BF and GF met him while out on an ice cream run, with him threatening to cut up the couple into million pieces if Boyfriend does not win the rap battle.

Songs featured in the Melty mod:

The gameplay of Friday Night Funkin vs Melty Full Week:

This section is dedicated to all those of you who are playing Friday Night Funkin' Games online for the first time since it's important to know how to win this rap battle!

To hit the notes of the song at the right time, you need to focus on the arrow symbols on the screen, and when they match one another above Boyfriend's head, press the same arrow on your keyboard to hit the note.

You win by getting to the end of the song and turning the bar green, but if you have too many misses in a row, the bar turns red and you lose the battle. Good luck to you, then!

Use the arrow keys to win the rap battle!