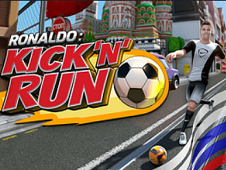 What is Ronaldo Kick n Run?

One of the most interesting 3D games for boys is appearing today here on play-games.com, and you dear friends can see that it's called Ronaldo Hit and Run, a new 3D game with sports, in which you dear boys can play football with one of the world's best player.

You and Ronaldo will be in a new 3D environment on the streets of Paris in France, and you dear friends can see that Ronaldo the best player in the world, former Real Madrid player and actual Juventus Torino player will need your help to gain a lot of points, because this is a new oline 3D runner game for boys, in which you will see that Ronaldo has prepared for you a very special adventure and challenge right here on our webiste.

Even though it's not going to be easy at all, the best football player in the world has brought for you this new 3D game for boys, and you will have to do your best to run, avoid roadblocks, shoot your balls in the targets and see how far you can reach with Ronaldo, and we are sure that you will have a great time and see how much fun you can have with all your friends, and we are going to continue bringing for you 3D football games with Ronaldo or other world class players. Have fun!

Use the ARROW and SPACE keys to play