Fireboy and Watergirl in The Crystal Temple

Fireboy and Watergirl in The Forest Temple

Fireboy and Watergirl in The Forest Temple 3

Fireboy and Watergirl in The Light Temple 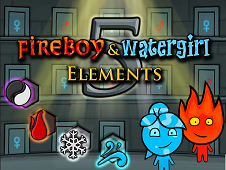 What is Fireboy and Watergirl 5 Elements?

For starters you will have to get acquainted with the main characters of the game Fireboy and Watergirl 5, who are a boy of fire and a girl of water, just like two normal children, but with superpowers. Each of the children is endowed with a superpower that helps them get through the missions they have in each adventure of the trilogy of this series. For connoisseurs, the Fireboy and Watergirl game series is one of the most popular two-player game series in which you will have to make a good team with your best friend so that together you can go through the missions you have a new adventure.

The game Fire and Water 5 is published by Kizi.com and contains 39 different levels. Each level is made so that it can be solved in a maximum of 5 minutes, but for those who have experience in the game they can finish it even faster, and on the other hand, new players who do not know the gameplay will need for a longer time to get through all these missions.

What is different about the latest game with Fireboy and Watergirl is that this adventure includes all the other previous missions:

Forest Temple: one of the most popular temples, in the forest temple both players have the same power, the landscape is full of greenery and hidden traps.
Fire Temple: the temple in which the fire boy has an advantage. He will have to go through the various fire traps to unlock the water-helping mechanisms he often has to wait for.
Ice Temple: the temple in which water is advantageous: here water will have to go through various long lakes with water, where the fire boy can not reach, and thus unlock the mechanisms for her partner.
Light temple: the well-known temple of lights is one of the most mysterious temples, where you will have to use the information learned in physics classes at school because you need to know exactly what a concave or convex mirror does, how you can reflect the light through the temple of light so that you start the respective mechanisms.
Wind Temple: a very strange temple, this time you will have to use the wind to get where you want. You can start or stop the vanes or windmills whenever you want. With the help of the wind, you will be able to move or change the position of objects.
Crystal temple: probably the hardest temple, because everything is very confusing, you will be able to enter through a gate and exit through another gate that can transfer you or even teleport you to another world. You have to know the game very well to be able to win the missions on time.

When did Freboy and Watergirl come out?
On September 28, 2010, appeared the first series of the famous adventure game in the Forest Temple.

How to play fireboy and watergirl?
It is very easy to play this game. You will need to use the arrow keys for the first player and the W, A, S, D keys for the second player. If you play Fireboy and Watergirl on your mobile you will have to use the button that switches the activity of the two characters.

How to beat fireboy and watergirl forest temple?
To get through all the missions of the game, you will have to take them one by one. The first time there will be three levels available, and depending on how you manage to complete the missions, you will be able to unlock new missions until the last one.

Who made fireboy and watergirl?
Oslo Albet is the creator of these two characters and of all the missions in which we see them.