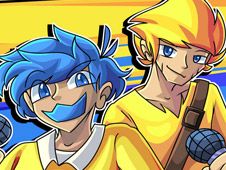 What is Friday Night Funkin’ vs Bob and Bosip?

Bob and Bosip are two Minecraft players who want to play the game together, but as soon as they power it up, they find themselves in a new universe, and not that of Minecraft, but in that of Friday Night Funkin Games, where they find out that the only way to get out is if they beat Boyfriend in a rhythm battle, but you're here to help BF defeat them since he wants to remain a champion of rhythm!

An FNF 2 against 1 experience coming up!

To win the musical battles you need to reach the end of the song and have the progress bar be in your favor, and that only happens if you had a good rhythm and played the songs according to their charts.

When arrow symbols on the screen match with that above BF, that is your moment to press the same arrow key on your keyboard, but if you get the timing wrong it is a miss, so be careful, since too many misses cause you to lose the game.

Good luck, we wish you all the best, and we hope to see more of you on our website today, and any other day!