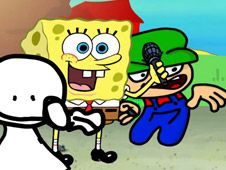 What is FNF: Impossible Trio (Bambi, Bob, and Spong Pinappled)?

Meme characters from the world of FNF and beyond have now come together as the impossible trio and these fun characters against which you've battled individually before now need to be defeated as a team, so go up against him and show them who is still a music boss on the following songs:

Help BF defeat even three rivals at once!

Whether you choose the story mode or free play mode, the goal you have is the same, and it is to reach the end of the songs by playing all their notes according to the charts. To do this, when arrow symbols match above BF, press the same arrow keys to hit the notes. Don't miss doing it multiple times in a row, since you end up losing the game. Enjoy!