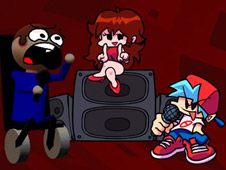 Dave and Bambi are a power duo of badly-drawn characters that are really popular in the world of FNF Games, so we are very happy that they are making their return right now, because their mod has been updated to version 2.5, where in addition to new weeks and songs, in the free play mode you can also unlock for new characters (Tristan, 3D Dave, Mr. Bambi, Dave). As for the songs, they are as follows:

Boyfriend is up against Dave and Bambi again, help him win once more!

You can play in either the story mode or free play mode, with us recommending both for the best experience, and in either case, to win, you have to reach the end of the songs by having played all their notes according to the charts.

To do this, you watch for when arrow symbols above BF match one another, and at the same time, press the very same arrow keys. Don't miss that moment multiple times in a row, since that leads to you losing the game and having to start again from scratch. Enjoy!