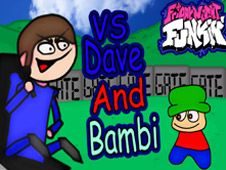 What is Friday Night Funkin vs Dave/Bambi?

A new day means a new opportunity for you to have fun with some of the best new Friday Night Funkin Games online on the internet, and we're going to prove that to you right now and here with the addition of the wonderful new game called Friday Night Funkin vs Dave/Bambi, which brings about two new characters to battle against, and lots of cool new music we're positive you will really love!

In this game, you will have rhythm battles against various characters, with the first one you have to defeat being a rap master that is in a wheelchair and whose name is Dave. You can then unlock Dave's son, Tristan, Dave again, then there is Mr. Bambi, as well as a new version of the first character called 3D Dave. The songs featured in this mod are the following:

How to play FNF Games online:

In order to win this musical battles of rhythm, what you have to do is press the arrow keys at the same time that the arrows over BF's head are matching, and get to the end of the song and make the progress bar green, but, be careful, because if you miss too many notes in a row, the bar turns red and you lose. Good luck!