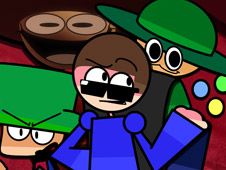 What is FNF Dave and Bambi: Intune Rally!?

In the FNF Intune Rally Dave and Bambi return as antagonists for you and Boyfriend, always a real ton of fun to be had when they have their little encounters, but this one is not that little, as it features quite a lot of amazing songs:

It's time for the Intune Rally with FNF's Dave and Bambi!

After making your choice between the two modes, story and free, in either case, give your best to reach the end of the songs by playing their notes according to the charts, which is how victory is achieved.

So, press arrow keys at the same time as the identical arrow symbols match above BF. If you miss them too many times in a row, you lose and have to start again from scratch. Good luck, enjoy!