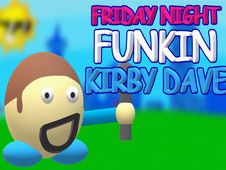 What is FNF vs Kirby Dave?

Because of radiation, Kirby Dave appeared instead of the regular Dave in a rhythm battle against Boyfriend, one that you have to win right now together with our blue-haired protagonist, and you do it on one awesome song called 'Kirbstomped'.

As the song progresses, watch for when arrow symbols float and match above BF's head, a moment when you have to press the identical arrow keys at the same time, and something that you have to keep doing until the conclusion to win. Be careful not to miss hitting the notes multiple times in a row, or you end up losing and having to start again from scratch. Enjoy!