Funkin In The Forgotten Land vs Kirby 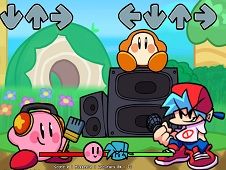 What is Kirby Mod x?

The new FNF game, Kirby Mod x is built around the famous character Kirby, whom we all know from the famous games Nintendo, Kirby's Dream Land and even Mario, but this time you will not have to start a new adventure, but you will have to you beat him with Boyfriend on three new musical rhythms.

Who is Kirby Mod x from Friday Night Funkin?

Kirby is a cute, round-shaped character with two small hands glued to his body, which he can't use very well. His legs are similar to his hands, but bigger so that he can keep his balance and not fall. His eyes are elongated, and on his face, he has two marks that represent his dark pink cheeks. The skin color is pink with different shades. His ability is to inflate like a balloon and to be very flexible, which helps him in his missions. It can fly if it swells, and if it falls, it does not hit. Even if this mode has only one week, you will have to focus and try to dance as well as possible, hitting as many of the arrows that appear in the game.

In the FNF new game you will be able to find three new songs:

The Dialogue between Kirby and BF:

-Hello! Who are you? You look very different. I have never seen you before.

-Lets fight your way by a rap battle, but if I win, I get to eat you ok?