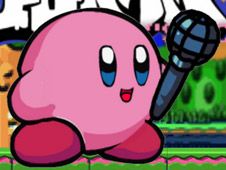 What is FNF vs Kirby Mod 2?

Kirby, the very cute and very pink video game character has been an antagonist of Boyfriend's before in our series of Friday Night Funkin Games online, but of course, we would be excited that right at this moment he is making his return since we've now got a new version of the Kirby Mod, one called simply FNF vs Kirby Mod 2, where you've got brand new songs, new backgrounds, cool stories, and tons of fun!

Yes, this mod has no less than seven awesome songs for you to battle in, and you can do it in either the story mode or the free play mode, it's up to you! Win by reaching the end of these songs and having the progress bar be turned in your favor, which means that you followed the charts accordingly.

How do you do that? Well, you use the arrow keys, pressing them at the same time as arrow symbols match above BF. Don't press them too late or too early, because if that happens, you lose and have to start again. Good luck, enjoy, and stick around for more fun to come!