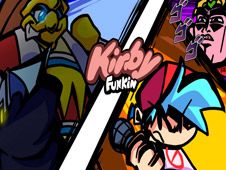 What is FNF Kirby Funkin vs King Dedede & Meta Knight?

A new FNF x Kirby crossover mod has just dropped for all fans of both these proprieties, of which we know there are plenty here, as it makes us very excited that right now you can have tons of fun with this game that features two new tracks, each with their own antagonist:

Help BF take on the newest enemies from Kirby Funkin'!

Whether you are playing in the story mode or free play mode, to win you do the same thing, which is hitting your notes according to the charts until the songs conclude. This means that when you see arrow symbols float and match above BF, that is when you press the identical arrow keys.

Missing to hit notes multiple times in a row leads to you losing and having to start again from scratch, so focus not to let that happen, but win instead and have plenty of fun. Enjoy, we wish you all the best!