FNF vs TABI The cursed King 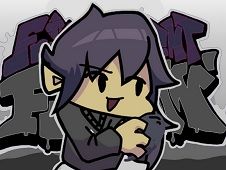 What is FNF vs King: Post-Mortem Mixup?

In the new FNF vs King Mod, we will have to help Boyfriend get over the new attempts he has in the newest week, entitled Limbo where he will have to fight on rap rhythms against Post-Mortem Mixup. In the game, we will meet Girlfriend who is eager to see how this battle will end. As you can see, the two were involved in a car accident, and BF is injured, GF started to cry and wants to wake up from this nightmare.

-So you're telling me that you managed to get into a car accident, while rapping on top of the car?

-Well, I can't just send you both to heaven or hell.

-That'd be against the rules, considering your...situation. Sorry, nothing I can do for you.

Who is King: Post-Mortem Mixup from Friday Night Funkin?

The post-Mortem is one of the kings of the depths, one of the greatest devils who manages to assert himself through the negativity he spreads everywhere. As can be seen in the previous dialogue, Post-Mortem stated that he could not help BF, choosing to let him agonize. The physical appearance of this new devil is quite familiar, he is the height of Boyfriend, he has green-brown skin, dark hair, medium length, and as clothing he is dressed in a tracksuit and sneakers, and in his right-hand holds a microphone to which he plays rap.

What are the newest songs from this Mod?