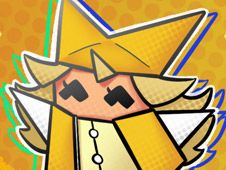 What is Friday Night Funkin vs The Origami King?

We welcome you back into our awesome category of FNF Games online once more, with our administrative team have now shared with you a fantastic new mod called Friday Night Funkin vs The Origami King, which is based around the Paper Mario: The Origami King game that came out in 2020 and had been received very well by the Mario fanbase, so of course it was a matter of time before mods based on it would arrive!

The Origami King is sort of like the antagonist in this game because he is trying to turn the whole Mushroom Kingdom into paper, something that Mario is trying to prevent from happening. The king looks just like you would expect like he is made out of paper, and he has blond hair, wears a golden crown on his head, and a golden top as well, and brown shoes on his feet.

After the Origami King turned Girlfriend into paper, only by having Boyfriend defeat him will she turn back to her human form, something you will do with songs called Roki, and My heart's-a burning.

How to play the Friday Night Funkin vs The Origami King mod online:

This being a rhythm game, you have to have good timing in order to complete the songs, something that you do by pressing the arrow keys that correspond with the arrows on the screen that are matching, and you have to do it at that time, exactly, in order to win the song battle, and not have misses in a row, or you will lose.

Good luck to you, and we hope to see you play more new games in this series right after this one!