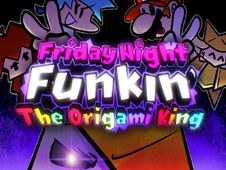 What is FNF vs Paper Mario: The Origami King?

There has already been a mod that has crossed over the FNF Game with the Paper Mario game before, where you got the chance to go up against the Origami King in order to turn everyone back from paper, but today we are delighted to showcase you all the newest such mod set in this world, one that has three full weeks for you, making the game bigger and better at the same time:

Defeat the Origami King through music and turn everyone back from paper to normal!

It's your choice how you enjoy these games, in either the story mode or free play mode, as you have the same purpose in both of them, and that is reaching the end of the songs by playing all their notes according to their charts.

To do this, when arrow symbols above BF match one another, make sure to press the same arrow keys yourself but know that if you miss doing it too many times in a row, you lose and have to start again.

We wish you all good luck and tons of fun, as always!